Hellin's origins date back to the most important settlement of our existing spent on the hill of Tolmo, in the hamlet of Minateda. Here was erected primitive Iyyu(h), one of the member cities Theodomir Pact with other Southeast Spanish as current Villena, Alicante, Elche, Orihuela and Lorca. This ancient city was gradually abandoned in the middle of the ninth century, while its inhabitants were dispersed by the next places, especially the most talented communications and water where, also, there were old Roman settlements. It was in this way that the current city emerge, in the Cerro del Castillo, currently constituting old town of Hellin.

Strolling through the old town hellinero, declared Cultural Interest – Historic in 2007, to appreciate and observe a number of features on urbanism and architecture from the twelfth century to the present, addition to enlighten on the model of architectural intervention in the cities of medium and small size.

Without being a monumental city use, Clearly in certain parts retains the imprint of the architecture, buildings interspersed with some of the local aristocracy and the bourgeoisie.

The historic town of Hellin settled on three hills, presenting a typical winding path of Arab cities would expand through narrow streets and, and blind alleys or adarves, with a claro protagonist: Almohad castle, of which few traces and numerous wall paintings are preserved. 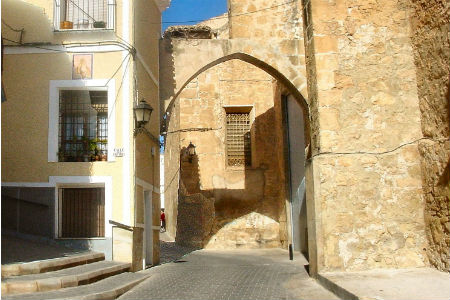 Around this fort humble dwellings rose, inhabited mostly by farmers, forming an urban layout that has endured nearly unchanged until the early twentieth century. Only some parts of the arciprestal church and an arcade corresponding to the old church, are the few examples of Gothic architecture in the city.

The Renaissance, with the presence of the mendicant orders and the strength of the church, left their hallmark in places like Franciscan Convent, considered the most important monastery of the Diocese of Cartagena, and Church of the Assumption, whose construction began in 1499 two purposes: create spaces for burials and routed separately to different social groups during religious ceremonies. The Church has on its back the iconic Arc of Salvador, element that could be one of the gateways to the wall within the Muslim city.

A few meters we found one of the best known parts of the historical district. This is the Beso Alley, currently considered the narrowest street in Hellin and which highlights the Mascuñan House, a house in the sixteenth century where, seem, I spent the night Carlos. Other buildings like the Falcon Homes, Salazar, Conde or Perier, are examples of stately homes seventeenth and eighteenth, like the backstage of the main churches.

The urban expansion of the nineteenth century, without any plan, contrasts with the orthogonal arrangement of the new zone. The last third of the nineteenth and twentieth first, is the figure of the local architect Justo Millán which stands out for its originality. His family home, the Casa Lillo, the front of the church Convent of Santa Clara, Cover, tower and internal reform Ermita del Rosario, nineteenth century, are examples of his work.