The MUSS It is the work of Exit-Architects (s. XX). We are talking about an avant-garde building in which the games of volumes and light surround the visitor in a journey that will not leave them indifferent. Considered one of the largest municipal museums in Spain, con 2.160 exhibition square meters, its physiognomy and construction materials provide a strong contrast to the old town, and at the same time it is combined recreating part of the facade of its original location: one of the most important manor houses in the town: The house of the Count of Lumiares, D. Antonio de Valcárcel Pío de Savoya and Moura.

The MUSS welcomes the greatness of the fusion of the two traditions that make up Holy Week in Hellín (declared of International Tourist Interest), its processions and tamboradas, which are also declared Intangible Heritage by Unesco. A duality that we travel under the motto: «Two traditions, a Holy Week », being able to contemplate six of the sculptural groups and mystery steps that parade at Easter with five exhibitions dedicated to her, a projection room inside a giant drum, a recreation of a sculpture workshop, an adaptable temporary exhibition hall, five documentary videos, fifteen interactive video screens, ten interactive teaching resources and multiple panels adapted to the demands of today's museums.

Also, the building houses other pictographic collections, archaeological and ethnographic, with more than three hundred historical pieces from various civilizations and that give a good account of the splendid past and the cultures that inhabited the region, as well as the impressive hellinero heritage. 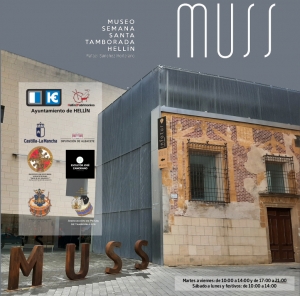